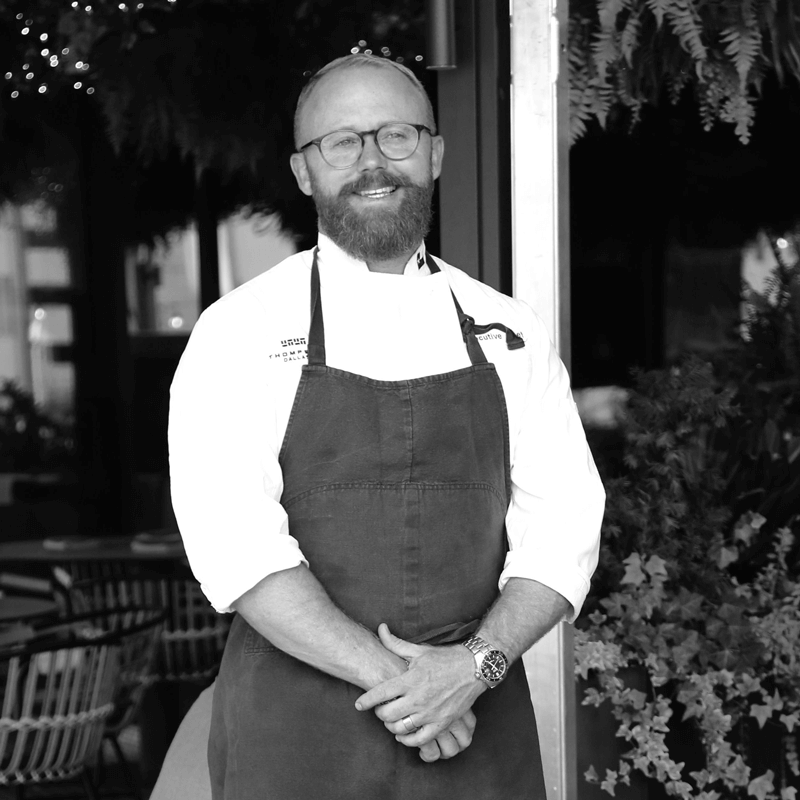 Jeramie Robison comes from Ruston, Louisiana, where he grew up surrounded by a family that always had one thing in common—the love of good food. From the time he was a child and displayed interest in cookery, his parents and four uncles encouraged him to pursue this path. Jeramie officially made his break into the culinary world at 16 years old as a dishwasher at Anthony’s Seafood and Pasta. After six months, he got his first shot at cooking on the line, and he was hooked. Upon graduating high school, Jeramie attended Johnson and Wales College of Culinary Arts in Denver, Colorado.

After college, Jeramie landed a place in the kitchen at The Mansion on Turtle Creek in Dallas. During his three years at The Mansion, he worked his way through every station of the French brigade kitchen, an experience to which he credits his foundation as a chef. His aptitude in the field stood out to then Executive Chef, John Tesar, who led Jeramie to his first sous chef position under Chef David Burke at Fish Tail in New York City. After a year in the big apple, Chef Tesar was able to lure Jeramie back to Texas, this time to Houston, to assume the role of chef de cuisine at Tesar’s Modern Steak and Seafood.

After nearly a year in Houston, word of Robison’s reputation in fine dining made its way to Dan Zimmerman, owner of the Colombe D’or, a boutique hotel that houses a fine-dining restaurant, Cinq, and event space, in historical downtown Houston. After accepting the position as Executive Chef of both Cinq and nearby Zimm’s Little Deck, a New Orleans-inspired seafood bar, Jeramie’s career as a chef began to take shape. In the years that followed, Jeramie’s work gained him local and national attention as he received the following accolades: Gayot’s 2011 Top 5 Rising Young U.S. Chefs Award, Star Chef’s 2011 Rising Star Chef Award, and Houston’s Star Chef Award in 2012.

In the spring of 2012, Jeramie had the opportunity to serve the chefs of the Uchi group who were preparing for the celebrated restaurant’s expansion to Houston. A few weeks later, Jeramie was honored to have the opportunity to take the helm at the mothership, Uchi Austin, where he was able to add Japanese cuisine as one of his specialties while learning the unprecedented systems and structures from Chef Tyson Cole himself. Under Jeramie’s lead at Uchi Austin, the restaurant continued its enormous success, earning a long list of accolades from 2012-2014 such as

While continuing to elevate a James Beard Award-winning restaurant, Jeramie groomed several young cooks into chefs, some of whom are still with the group leading kitchens of their own. Not only did Uchi provide further career trajectory for Jeramie, but it was here that he met his wife of almost 6 years, Janna.

At the end of 2014, Jeramie jumped at the opportunity to move to Dallas to be closer to family and take the lead as executive chef at Park Cities neighborhood restaurant gem, Shinsei. There he spent over a year getting reacquainted with the Dallas scene and adding a fresh perspective to the well-established, local favorite before reuniting with culinary force, Tyson Cole, for another year with Uchi, this time in Dallas.

2016 found Jeramie craving the chance to use his breadth of experience to take a less-defined concept and make it his own. That very opportunity arose at City Hall Bistro in the historic Adolphus Hotel, and over the next 3 years, Jeramie did just that. At City Hall, Jeramie was able to cultivate a Levant-inspired dining niche that provided “simple, elegant, good food,” and critics agreed was “just what downtown needs.” By the end of his time with City Hall Bistro, Jeramie had taken on the hotel’s grab-and-go culinary program, all in-room dining operations, hotel amenities, and the vast majority of the hotel’s offsite special events, while maintaining status as a local favorite with a 4.7 star Open Table rating.

Jeramie couldn’t be more excited to continue blazing a trail in Dallas as the Thompson Hotel’s Director of Culinary. With many cuisines to draw upon, a passion for the teams he leads, and a bright history, we can expect an array of flavors and worldly inspirations that will surely find the balance between refinement and relaxation—Chef Jeramie’s signature.

PRAISE THE BISCUIT…PASS THE JAM: A SOULFUL SUNDAY BRUNCH

A TASTE OF NAPOLI WITH CHEF DINO SANTONICOLA

Paired with The Original Venetian Spritz

Note: Carousel will only load on frontend.